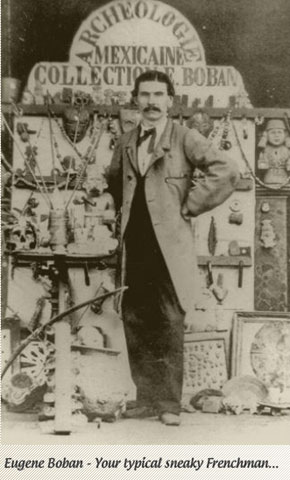 French antiquarian Eugene Boban, best known for his work with the French Scientific Commission and for his habit of bathing as frequently as an Englishman, opened up his display of Mesoamerican artifacts at the Exposition Universelle in Paris today.

Featured in his exhibit were two very, very strange crystal skulls of unknown origin and age. The skulls originated in Mexico and were made in 1201 A.D., or possibly earlier or later, but most definitely Pre-Columbian.

Boban seemed nervous and a bit distant this morning. It could be that he had opening day jitters, or the fact that his appointment as the official archeologist of Maximillian was cut short when Maximillian was executed earlier today by Mexican president Benito Juárez. When asked how he had come to obtain the skulls, he was very evasive, simply stating that they had “fallen off the back of a Mexican turnip wagon.”

This is not the first instance of mysterious, and some say magical (I say it, anyway) tiny, two inch tall skulls surfacing. Henry Christy, a British banker and part-time fishmonger, is attributed with owning the first known recorded skull, having shown it to a few trusted friends at a high-society party in 1856 with the understanding they were sworn to secrecy.

The next day officials from the British Museum showed up at Christy’s home and asked to see the skull. Christy reluctantly held it out for them to observe, and one of the officials asked, “Can I hold it?” Against his better judgement, the banker handed it to the man, who quickly pocketed it and, when he demanded the skull’s return, the other man gave him a wry look and said, “What skull?”

What is so special about these skulls, you ask? Although they were found in Mexico, they cannot be tied directly to any specific culture, and none of the skulls were found in official dig sites or have any documentation whatsoever to substantiate or reveal where they were originally discovered. The actual number of skulls in existence is unknown, but I’m going to guess seventy-five. This is why they are so mysterious. And magical.