Catching Up on Russia

a review of early twentieth century happenings in the soviet union 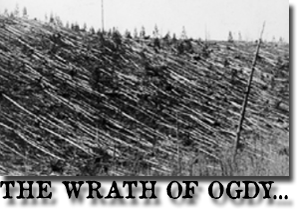 The blast (Tunguska Event) flattened an area close to the size of Rhode Island, destroying tens of millions of trees and knocking citizens off their feet fifty kilometers in the distance. The event was felt as far away as London, with Prime Minister Henry Campbell-Bannerman (spilling his tea) having been heard saying, "My word, what are those bloody Russians up to now?"

Russian authorities, curious as to why a vast area of their country was suddenly engulfed in flames, questioned local residents to find out exactly what had happened. The locals were fearful to speak about the impact event, believing it to be the work of the wrathful god Ogdy. The scientists on site explained to them that they were a bunch of ignorant peasants and the idea that this was Ogdy's work was just plain idiotic. They then went into detail about earth's gravitational pull, orbiting asteroids and blast radius, to which one of the locals replied, "I dunno...that all sounds made up."

Eventually, the peasants began to speak, and described the event as the sky splitting in two and turning to fire. A sound like a cannon firing was heard and they were thrown off their feet. One of the locals, a reindeer rancher named Olaf Cheko, mentioned that there was now a new lake where his home used to stand, which he named Lake Cheko.

Upon further investigation, the Russian scientists found that a one meter section of the space rock had carved out a substantial area of his property, resulting in the formation of the new lake. Nicholas II, Emperor of Russia, seemed quite relieved by the news, stating, "Well, that's that, I suppose. I was just wondering."

The final leg of the Trans-Siberian Railway was completed earlier this week near the Amur River, giving Russia the longest continuous railway line on the planet.

The brainchild of Tsar Alexander III, work crews began construction in 1891, simultaneously laying track on both ends of the country until they eventually met and linked together, similar to how the American Trans-Continental railway system was built.

The railway is 5,772 miles in length, stretching from Moscow in Western Russia to Vladivostok near the Sea of Japan. The construction of this massive railway system will now enable the development of Siberia, allowing Russia full access to her rich natural resources, opening the doors to new trade routes and giving the citizens a renewed sense of optimism (rarely seen in Russia) as we move forward into the twentieth century. Up until this point, Russia has relied on steamboat transport into the interior, with the first official launch in 1844. Steamboat travel has always been unsuitable, as it can only be utilized five months of the year due to inclement weather and transportation of raw materials is an extreme challenge on the best of days.

Thoughts on creating such a railway system have been bandied about since the completion of the Moscow-St.Petersburg Railway in 1851, but it is Tsar Alexander III who takes full credit for the idea and no one is inclined to disagree with him.

At its height, more than eighty-nine thousand soldiers and slave laborers worked full time on the project. As a reward for their efforts, Tsar Alexander III offered the laborers the chance to be the first official passengers on the inter-continental railway system, transporting them down the line and depositing them in the newly formed Gulag prison camps to finish out the remainder of their days.

Not to be outdone, President Woodrow Wilson announced earlier today that he planned to expand the American Trans-Continental Railroad up to Alaska, making it the longest railway system in the world. In response to this proposed extension, Canadian Prime Minister Sir Robert Borden stated bluntly: "Over my dead body, eh." To which President Wilson replied, "We'll talk about it."

The Russian Gulag penal system goes down in history as possibly the most inhumane and barbaric means utilized to punish soviet criminals and dissidents. Millions of hopeless souls were transported across the desolate Siberian Hinterland and deposited in crudely constructed work camps spread across the frozen permafrost, never to heard from again. None was more infamous or inspired more terror in the proletariat than - Gulag Prison Camp Perm-36.
(cont'd...)

Russian writer Fyodor Mikhaylovich Dostoevsky was sentenced to death today for his participation in the Petrashevsky Circle, a liberal think tank which expoused such radical thoughts as personal liberty and freedom of artistic expression.

Not ones to waste time on such matters, the authorities quickly marched the writer and his friends outside to be executed on the spot. After waiting in the freezing cold for several hours, a group of riflemen eventually appeared, lined up and fired their weapons at the terrified prisoners.

Thankfully, the guns were not loaded and the soldiers had a good laugh at the dissidents' expense. The confused men were then loaded up and hauled to Omsk, Siberia, where they are to remain for an undetermined period of time in Katorga prison camp performing hard labor.

Dostoevsky later commented, "Although I found the mock execution to be in really bad taste at the time, mulling it over, I have to say I do enjoy a good joke."

REVOLUTION IS OVER: A NEW ERA IN RUSSIA BEGINS AS SOVIETS SEIZE POWER

The first meeting of the Congress of Soviets met this evening to begin the process of restructuring the government of Russia. After years spent in a clandestine and hard-fought battle of words and fists, the Bolshevik party has managed to oust the Russian monarchy and usurp the highest echelons of power.

Vladimir Ilyich Lenin, the official leader of the worker's party, showed up to head congressional proceedings, appearing publicly for the first time in years undisguised. Although the majority of folks were happy to see that Lenin was feeling comfortable enough to "just be himself", others were disappointed, as they rather enjoyed some of the disguises he had donned in the past: Marie Anoinette , Florence Nightingale and (most recently) famous artist Evelyn De Morgan were just a few of the many personas he adopted during his tenure as the underground commander of the Bolsheviks.*

In February, Tsar Nicholas II (son of Alexander III) was forced to abdicate the throne after discovering that perhaps he wasn't as beloved by the peasant class as his mother had told him, which hurt his feelings. In truth, hurting Nicholas' feelings was the least of Lenin's concerns, as vendetta against the royal family has been the Soviet leader's primary motivation since the day his older brother, Aleksandr Ulyanov, was hanged for an assassination attempt against Alexander III.

Following the botched assassination attempt, Lenin himself was sent to prison for several months for plotting against Alexander III. Shortly thereafter, he was carted off to Eastern Siberia, at which time Alexander III (wiping his hands symbolically) stated: "I guess that's the last we'll see of that nogoodnik troublemaker." How very wrong he was.

Lenin, now severely peeved, vowed to escape his arctic confines and take revenge on the monarchy. During his stay in Siberia, he met Georgy Plehanov, a dyed-in-the-wool Marxist who is thought by many to be the father of Russian socialism. Considered a serious logistics error on Alexander's part, he was later heard moaning, "Of all the prison camps in all the isolated, backwater villages in all of Siberia, I had to pick that one to send him to!"

The Congress of Soviets meeting opened with Lenin shouting, "We shall now proceed to construct the Socialist order!" - which everyone in attendance agreed was a great way to open up the proceedings. Lenin then went on, stating that it was now time to decide whether or not all lands owned by the crown and the filthy rich should be taken and redistributed to the peasant class. One man, Olaf Cheko, stood up and objected fiercely to this plan, as he had only recently acquired some prime real estate. He was promptly dragged to the side and shot in the head.

Where does the new Soviet Union fit into the grand scheme of things? This American writer predicts that we and the Soviets will have a close, solid friendship lasting long into future millenia. When asked his opinion, President Woodrow Wilson said, "As long as they don't go around building giant railways and such things, I see no problem."

*Lenin's penchant for dressing up as women lends strong credence to Sigmund Freud's analysis of the socialist leader, who summed it up thusly: "Reverse penis envy with strong mommy issues..."