The genius behind the elements of these unique film genres

Film Noir, or Noir, is often described by individuals in the same way they explain pornography: "I can't really define it specifically, but I know it when I see it."

Film Noir is not a genre or sub-genre of films; it typifies the tone or mood of the movie. The term "Film Noir" first began circulating among film critics in France as a way to describe many of the movies produced by Hollywood during and directly after World War II as we entered the Cold War period. The general theme we think of as noir emerged & evolved in California thanks to several German filmmakers who immigrated to the United States and brought with them their German Expressionist sensibilities. It is important to note that Hollywood filmmakers at the time were not intentionally out to create an entire class of films; Their "Film Noir" movies were labeled as such much later in time, after the Classic period of cinema.

These movies were bleak, dark and smoky with an undercurrent of pessimism and paranoia intertwined with the theme. Shot in black & white with an emphasis on heavy shadows and darkness, these movies left no mistake in the viewer's mind that they were about to embark on a very sinister and malevolent journey. They featured a cynical and disillusioned anti-hero pitted against a femme fatale: A sexy, mysterious, cunning and ruthless woman. Although hardened and street-wise, the anti-hero would find himself vulnerable when faced with the charm and allure of the femme fatale. They were two sides of the same coin and this twisted relationship formed the catalyst for dark events yet to transpire within the story.

The characters intrigue us because they represent the outcasts who live in that lonely, forsaken underworld on the fringes of society. Gangsters, morally corrupt private eyes, criminals and low-lifes: These are the characters who both repel and attract us. They are that little dark corner of the soul we all carry within us and struggle desperately to hide from the world. And here were these people on the silver screen flaunting their imperfections, giving the finger to convention & social mores and committing acts of depravity as easily as ordering a cup of joe at your neighborhood diner.

when we speak of camp we are referring to movies that have a certain self-aware charming banality and artificiality so extreme that the true elegance and finesse of the film is immediately revealed to the knowledgeable viewer."

Another distinct feature of film noir is the witty dialogue which is short, snappy and machine-gunned back and forth between characters: An intellectual jousting match or, in many cases, a form of courtship as the femme fatale shows her mettle and quickly earns the respect of the anti-hero. These movies would often begin with a voice-over by the male lead, the narration continuing throughout the picture, both informing and entertaining us as we explored the thoughts & dark recesses of his psyche. The most well-know actors who played the role of the anti-hero are Humphrey Bogart (The Maltese Falcon , 1941), Fred MacMurray (Double Indemnity, 1944) and Robert Mitchum (Out of the Past, 1947). When we think of femme fatales Veronica Lake (The Blue Dahlia), Barbara Stanwyck (Double Indemnity) and Mary Astor (The Maltese Falcon) pop to the forefront of our mind. 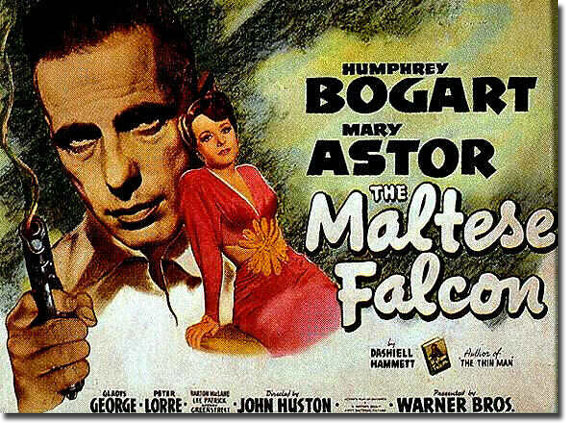 The term "Camp" was first used in 1909 to describe flamboyant and exaggerated theatrical productions that were so conspicuously over-the-top in regard to acting & story-line as to be appealing to a sophisiticated audience. The definition has fluctuated over the years as camp films have come into their own but, generally speaking, when we speak of camp we are referring to movies that have a certain self-aware charming banality and artificiality so extreme that the true elegance and finesse of the film is immediately revealed to the knowledgeable viewer.

Camp films emerged in the 1960's and their popularity has not diminished in the least. Camp comprises an aesthetic and is not a film genre in and of itself. If you are familiar with the works of John Waters (Hairspray, 2007 & Pink Flamingos, 1972) then you will understand the tone and sensibilities of this class of film.

The basis of Camp is its ironic analysis and revelations of the societal norms & mores in which it finds itself and subsequently then derives the foundation & backdrop for its stories. The underlying theme of Camp Films flaunts lunacy in the face of convention, throwing the hypocricy of the modern age back in the face of the viewer and tells them "Hey, society is stupid, but we're all in this together!" Camp is deep introspection from an insider's point-of-view, a courageous confrontation of the consumerist, self-indulgent and selfish attitudes that exists in all of us.

Drag plays a large role in Camp productions, making a very visual statement to the audience that what they are viewing is definitely outside the confines of the status quo. Devine (Harris Glen Milstead) is a name that most cinephiles would recognize from several John Waters movies. Another modern actor is San Francisco's Peaches Christ (Joshua Andrew Grannell) who plays a role in one of my favorite camp horror movies All About Evil (2010).

Camp televisions shows of the 1960's (most famously Batman) were used by their producers to test the new color medium via the utilization of flashy content and stylization as TV moved from black & white to color. You notice this in the vamped up costuming of all the super-villains in the Batman series.

It is also interesting to note that the 1953 Movie Beat the Devil was a deliberate tongue-in-cheek camp style spoof of the Maltese Falcon, featuring the self-same star of the film, Humphrey Bogart.

As Camp has become more ingrained in popular culture, there has been a watering down of the aspects of this mode of performance by some Hollywood studios to take advantage of current trends without truly understanding the aesthetic they try to emulate (what else is new?). I would say the best modern example of an extraordinary film that contains many of the attributes of camp is 2001's Donnie Darko. Darkness and silliness are juxtaposed perfectly in a complex story that certainly makes this one of my top ten movies. And, as I mentioned earlier, All About Evil is a modern standout with a very low-budget campiness that I find extremely appealing.

Thanks to Eden, Prairie, Minnesota's very own Mystery Science Theater 3000, everyone not living under a rock is very familiar with the B-Movie. The beauty and appeal of classic B-Movies from the 1960's & 1970's relied on the fact that they were naively unaware of their own future B-Movie status. Their innocence allowed us the latitude to openly mock, and dearly love, these inept attempts at cinematic excellence.

The original usage of the term B-Movie meant quite literally a B Movie: A second movie, used as a time-filler after the "better" and well-publicized main attraction was done playing. The definition has evolved over the years, but typically we think of B-movies as inexpensive, tasteless and often times exploitive. Conversely, B-Movies can also maintain a superior level of artistic integrity and sophistication masked by their ever apparent lack of proper financing. The B-Movie director must be innovative and clever in order to capture a scene that he/she envisions but can't afford to construct via conventional methods (it always comes down to the dollars).

It is difficult to classify B-Movies as a genre onto themselves; All B-Movies fall into a primary genre whether it be western, science fiction, thriller, etc. Probably the best way to classify them is as a sub-genre that encompasses all movies sharing the B-Movie set of attributes.

There are modern B-Movie films; however, these movies are very self-aware of their intended status & market and do not truly fall into the same category as films of the past. It is impossible to capture the nuances of former B-Movies, as once you are self-aware there is no going back. The Emperor's New Clothes have been revealed and innocence is lost, friend.

That is not to say that modern B-Movies do not have an appeal all their own. They do share many of the same characteristics of their past counterparts. The works of Quentin Tarantino are extremely hyper-aware of their own B-Movie qualities and throw it in the face of the viewer, the most obvious being his 2007 double feature release Grindhouse (Death Proof & Planet Terror). Tarantino borrows heavily from past influences and makes no effort to hide the fact that he is intentionally creating a B-Movie-esque movie from the ground up. Contrary to the philosphy of 1970's B-Movies, his hyper-awareness works for him and consequently the movies he produces have created a whole new sub-genre, the formula & style emulated by many writers, directors & producers since the mid 1990's.

There are several actors who received popular status in society based soley on their B-Movie work. The most famous and reknowned of all is Bruce Campbell of The Evil Dead trilogy. He has been in many movies and TV series over the span of his career, however he will always be remembered for his role as Ashley 'Ash' J. Williams. Currently, you will find him working on the USA Network's television series Burn Notice.

There has been a decline in the production of B-Movies since the early 1980's. Audience expectations as well as ticket prices have risen, and producing a Hollywood "low-budget" feature can now cost millions of dollars. Attitudes changed, society changed and a growing sophistication in modern movie-goers rang the death knell for the B-movie.

Fortunately, many of these classic B-Movies from the 1960's and 1970's have been preserved and there has been a new-found cult following of these gems from the past. If you are not familiar with this sub-genre, I highly encourage you to check it out. This is an important and dynamic part of film history that every cinephile should add to their list of guilty indulgences.