Bruce Campbell: King of the B-Movies

Author's note: Since it is Bruce's 53rd birthday tomorrow, I thought it fitting to pay tribute to the King by writing a bio commemorating his cinematic achievements.

No name is as synonymous with B-movie horror as that of Bruce Lorne Campbell, the actor who is most famous for his role as the iconic lead character Ashley J. "Ash" Williams in the movie "The Evil Dead." Thanks to Bruce's charismatic on-screen presence and humor, the B-movie franchise (The Evil Dead, The Evil Dead II and Army of Darkness) gave birth to the horror sub-genre "horror comedy."

Living a quiet existence in Southwestern Oregon, Bruce is as far removed from the Hollywood scene as a major star can get, stating, "If you go to Hollywood, you've already sold out. By the sheer act of going there, you're saying, 'I need to go there because this is the only way I can get my movie made.' Baloney! Indiana's the place to make your movie." Little appreciated by the Hollywood film community early in his career, Bruce has since proven he can deliver the goods, practically carrying every movie he acts in through the sheer force of his dynamic personality and magnetism. 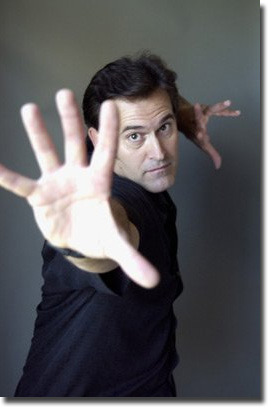 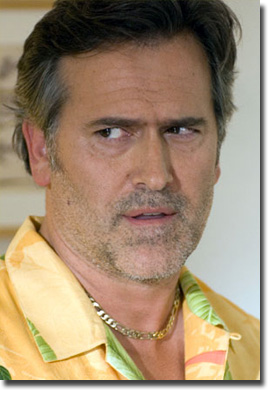 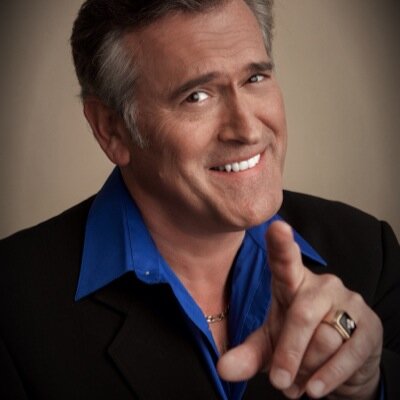 Bruce was exposed to acting at the age of eight, when he watched his father perform in amateur theatre and, completely enthralled by the production process, decided right then and there he would be an actor. It wasn't until high school that he was given the opportunity to really sink his teeth into acting - and he attacked with gusto, performing in a wide variety of school productions and in the local community theatre.

Later in high school, he got his hands on a super-8 movie camera and, purely by chance, crossed paths with fellow student Sam Raimi. Together the two budding filmmakers independently filmed and produced fifty low-budget movies. Working with Sam pretty much cemented Bruce's conviction that acting, directing and producing movies was his destiny.

Straight out of high school Bruce Campbell took his first gig as a stagehand at Traverse City's Cherry County Playhouse, working long hours for no pay but gaining a wealth of insider knowledge on show production and management. Three years later he reconnected with buddy Sam Raimi and they decided to go-for-broke on a script Sam had recently written, approaching potential film investors for a stake in their future creation. The passionate duo raised the money and two years later "The Evil Dead" was released to the public, changing the face of horror forever.

Since that time, Bruce Campbell has been featured in several Hollywood movies and television shows, but his heart has always been in independent film. He enjoys the freedom of working with like-minded people, free from the constraints of Hollywood bureaucracy, red tape and vapid producers & studio heads only concerned with bucks: Sterile suits churning out the same trash over and over simply to fill the company coffers.

Bruce is an artist. And as an artist, he is focused on great storytelling and bringing his unique vision to the big screen. Quality over quantity, to be sure. Point of fact: The Evil Dead, now in its thirty-first year, is still unmatched in its raw passion and cinematic brilliance; a demonstration of what two ingenious creatives can do with imagination, drive and very little money. The old quote "Often duplicated, never replicated" applies to this movie: You simply cannot buy true creativity, quality or originality, no matter how much money you throw at it (James Cameron, please take note).

Currently, Bruce Campbell works on the USA Network's television series "Burn Notice", playing Lieutenant Commander Sam Axe, a retired Navy SEAL. Although older, a little heavier and a bit grey, Bruce only gets better with age, proving once again that acting comes from the heart & love of cinema, not from a desire for fame and riches or to achieve that all too often sought after Hollywood title of "Movie Star."

When asked about breaking into the B-movie business, Bruce said, "Don't aspire to be a B-movie director...you'll be there soon enough." 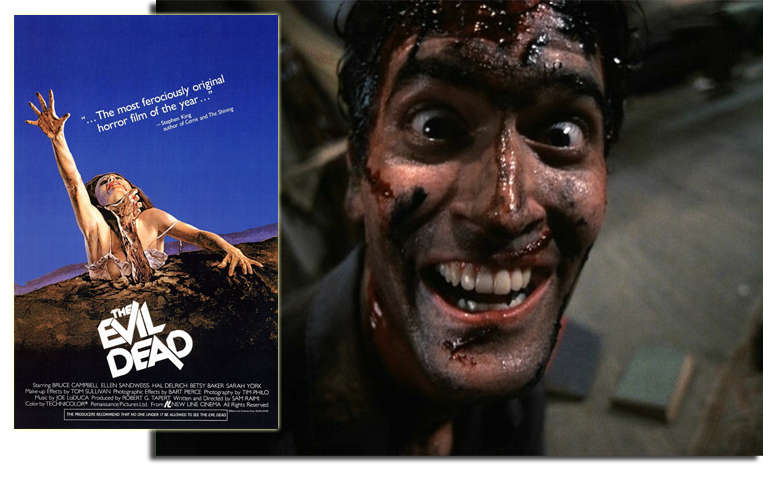